OPITO crowns its 16th Apprentice of the Year

Youngster from Stranraer is recognised for prestigious industry award 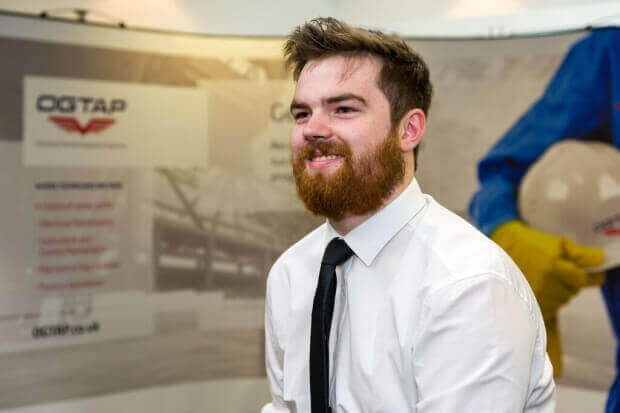 An ambitious and focussed young individual has been awarded the highly coveted Apprentice Of The Year Award by oil and gas skills body OPITO.

Gareth Strang from Stranraer showed outstanding ability and attitude during the 21-month college phase of the 45 month apprenticeship scheme, which has brought over 1,600 young people into the oil and gas industry since its inception in 1999.

The Oil and Gas Technical Apprentice Programme (formerly the Upstream Oil and Gas Technician Training Scheme), now in its 16th year, sees students take part in a twenty one month full time course at one of the industry-appointed colleges before starting a two year worksite placement.

Gareth said: “In this environment, I feel incredibly honoured and proud of what I have achieved what I have in such a short space of time. The other contestants were so impressive, I’m really surprised to have won.

“I’m extremely grateful for the experience I have gained and see myself as extremely lucky to be in this position. I found out about the opportunity to apply for the apprenticeship through friends, also from Stranraer, who had already completed it.

“In the future, I hope to become a senior mechanical technician, working my way up the ranks of an organisation. I also see myself working abroad.”

The next stage of Gareth’s apprenticeship will see him finish his HNC in mechanical engineering before completing the relevant safety courses and heading offshore and embarking on full-time working life.

Gordon McNeil, OPITO Technical Programmes Director said: “What a tough choice this year has been. Gareth should be immensely proud of his achievement, he has shown impeccable attitude and drive throughout his apprenticeship so far.

“As the requirements to work in the industry get increasingly more complex, the level of talent required within the apprenticeship pool must increase. Gareth has showcased his impressive ability to work in such an environment and this gave him the edge to win the award.

“It’s fantastic to see the continuing strength of the apprenticeship scheme in its 16th year. We hope that, despite the current industry environment, companies will remain fully engaged with apprenticeship programmes such as this.”

The Oil and Gas Technical Apprenticeship Programme (OGTAP), has to date received £140million investment from operators and major contractors and is backed by 19 companies in a bid to encourage the support of apprenticeship schemes during the downturn.