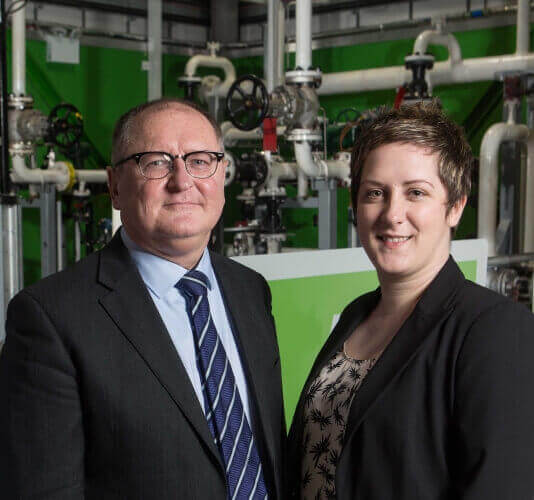 THE oil and gas industry is marking Scottish Apprenticeship Week by celebrating the 15th anniversary of one of the most successful youth training schemes in the country.

Past and present apprentices in Aberdeen, Edinburgh and Falkirkwill join forces today (May 19th) as the industry’s official technician training scheme reaches the significant milestone in its history.

Operators and major contractors have invested more than £120million into the programme since it was established. Now backed by more than 15 companies it is one of the biggest industry-led MA programmes of its kind in the UK.

Around 100 trainee positions are available annually on the UK Upstream Oil and Gas Industry Technician Training scheme which boasts one of the highest achievement rates at 93%, compared to the national average of around 65%.

Sinéad Watson, a global HSE performance analyst with TAQA, was aged 18 and the only female on the very first intake of apprentices in 1999. Today she met with youngsters on the current programme as they underwent their training at ASET in Aberdeen.

“I didn’t know much about working offshore when I was at school – at that time careers advisers never pushed the oil and gas industry and I had no idea what it entailed,” she said.

“For some people university is the way to go, but doing the modern apprenticeship let me see the end game all the way. There’s no right or wrong way to get into the industry, but this opportunity gave me the on-the-job experience I needed and I learned from the best.

“Once you are on the scheme you’re not competing to get a job, it’s all part of your training. After four years I had the skills and knowledge I needed to stand on my own two feet and I was able progress up the ranks.

“Fifteen years on there is a much greater push for young people to join oil and gas and OPITO is attracting brighter talents every year. OPITO shows that it’s not just traditional apprenticeships on offer out there – this particular one can take you almost anywhere in the world and there are plenty of routes you can end up taking.”

Owen Buchan was just 16-years-old when he was accepted onto the apprenticeship scheme. After two years studying the electrical engineering course, he is due to complete his two years’ on-the-job training with Apache later this month.

“Working in oil and gas is even better than I thought it would be. I like being able to come home at the end of a two weeks shift and knowing I’ve achieved a lot in the time I’ve been away,” he said.

“I wouldn’t be where I would be where I am now without the apprenticeship. I’m about to enter an industry where I know what I’m doing and have had the right training to be able to stand on my own two feet.

“An apprenticeship gives you a foot in the door in a competitive industry and helps you meet the right people. I can’t think of any better way to get ahead.”

Managed by OPITO, the skills organisation for oil and gas, in partnership with the Engineering Construction Industry Training Board (ECITB), more than 1,400 young people have entered the industry since the scheme’s formation, creating a grassroots solution to the industry-wide skills shortage.

John McDonald, UK managing director of OPITO, said: “Apprenticeship programmes are an excellent example of how an industry can proactively tackle its skills issues. Oil and gas is the UK’s largest industrial investor, contributing billions to the economy and employing more than 440,000 people. The recruitment and training of technicians is critical to developing and retaining the workforce we need to continue to take on the world’s toughest energy challenges.

“We receive thousands of applications annually from young people keen to be part of the industry journey. The qualifications they gain are recognised internationally so the apprentices have the skills required to work anywhere in the world and, as such, are highly sought after by employers.

“This year, as we celebrate the 15th anniversary, it is fantastic to look back at what has been achieved to date and how the programme has grown into one of the most successful in the UK.”

Split into two phases, the programme sees students take part in a 21 month full time course at one of the industry-appointed colleges in Aberdeen, Forth Valley or Edinburgh, before embarking on a two year worksite placement.

“As the skills organisation for oil and gas, we are keen to ensure that future generations of workers are aware of the opportunities in the sector and we believe that it is critical that industry plays a role in maintaining students’ levels of interest in the sector from a young age,” added Mr McDonald.

“We're running a raft of initiatives that are geared to attracting the future oil and gas workforce, including working with schools and encourage the uptake of science, technology, engineering and maths subjects, so school leavers are equipped with the basic skills required to enter the industry.”